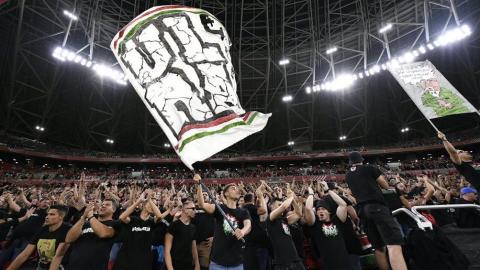 But it wasn't until the end of World War I that explicit far-right ideology arrived in Hungary, with the humiliation associated with the dissolution of the Austro-Hungarian Empire and the infamous Trianon Treaty providing the perfect breeding ground for such beliefs. Then, in the wake of the Great Depression of the 1930s, the far-right organisations of MOVE and EME started to gain real traction in Hungarian political circles.

Predictably, as the institutionalised anti-Semitic ideology intensified, this filtered down to the football terraces and the burgeoning rivalry between Hungary's two most most-widely supported clubs, MTK Budapest and Ferencvaros, where far-right sentiments first spawned and, as time went by, proliferated.

Today, far-right ideology is the sentiment shared by the overwhelming majority of fan bases throughout Hungary, while the government's position is now one that aligns closely with football fans for the first time since pre-WWII - the consequences of which remain troubling.

The pugnacious rhetoric used by Hungarian government figures is now used interchangeably by those on the terraces. And with there existing unofficial links between Hungary's main ultra (ultrak) groups and the governing Fidesz party of Prime Minister Viktor Orban, it inevitably brings back memories of Serbian strongman Slobodan Milosevic's links to the Red Star Belgrade ultras in the 1990s.

Then, Red Star ultras acted like the government's stormtroopers, yet this has never been Orban's way, who prefers to deal in 'soft' fascism via subtle manoeuvres rather than violent action. However, the way in which Hungarian football fans mimic his rhetoric on the terraces and in the stands will no doubt warm his heart.

But given the strong...