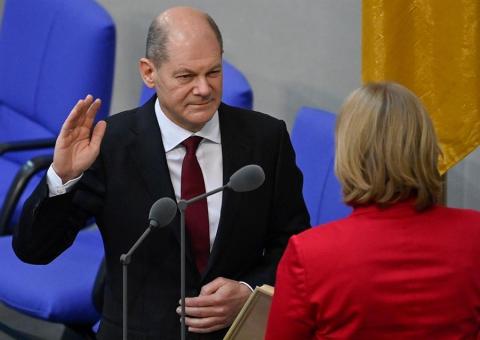 Scholz's government takes office with high hopes of modernizing Germany and combating climate change but faces the immediate challenge of handling the country's toughest phase yet of the coronavirus pandemic.

Lawmakers voted by 395-303 to elect the center-left leader, with six abstentions _ a comfortable majority, though short of the 416 seats his three-party coalition holds in the 736-seat lower house of parliament. That's not unusual when chancellors are elected, and some lawmakers were out sick or in quarantine.
Scholz was formally appointed by Germany's president, then returned to parliament to be sworn in. The new chancellor, who has no religious affiliation, omitted the optional phrase "so help me God" from his oath of office _ as did Merkel's predecessor, Gerhard Schroeder.

Merkel, who is no longer a member of parliament, looked on from the spectators' gallery as parliament voted. Lawmakers gave her a standing ovation as the session started.
Scholz, 63, Germany's vice chancellor and finance minister since 2018, brings a wealth of experience and discipline to an untried coalition of his center-left Social Democrats, the environmentalist Greens and the pro-business Free Democrats. The three parties are portraying the combination of former rivals as a progressive alliance that will bring new energy to the country after Merkel's near-record time in office.
"We are venturing a new departure, one that takes up the major challenges of this decade and well beyond that," Scholz said Tuesday. If the parties succeed, he added, "that is a...