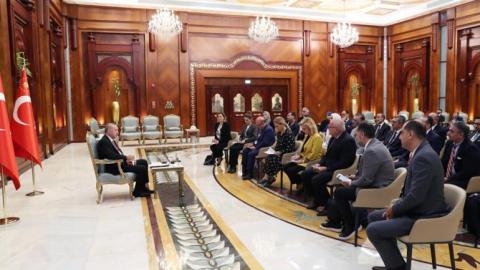 Representatives from Turkish and Qatari private sectors will hold talks to run the airport in Afghanistan after the Taliban took control of the country, President Recep Tayyip Erdoğan said.

"The Qatari side has determined a name from the private sector regarding this issue. Likewise, the Turkish side also determined a name. These companies will negotiate with each other and also with the Taliban and cooperate with our related friends in this matter. If appropriate conditions, especially security, are provided, they will deal with the operation process of this airport in Kabul," Erdoğan told journalists accompanying him in Doha.

Elaborating on his visit to Doha, Erdoğan said they confirmed the mutual political will to deepen and expand the cooperation between Turkey and Qatar to new areas.

With the agreements signed in Doha, Turkey-Qatar relations have reached a new level, Erdoğan said.

They observed once again that the policies of the two countries towards regional and global issues overlap, he emphasized.

"Turkey-Qatar relations also make significant contributions to the security and stability of the region. Turkey and Qatar have shown that they are true friends by acting in solidarity in difficult times. We cannot forget the solidarity that Qatar has shown with our country, especially after the 15 July betrayal. We, too, have taken every step to nullify the unjust blockade and sanctions against our Qatari brothers. Hopefully, we will continue to stand by Qatar and our Qatari brothers."

Turkey does not keep the stability, security and prosperity of the Gulf region separate from Ankara, Erdoğan stated.

"On this occasion, I would like to reiterate that Turkey is always ready to contribute to overcoming the tensions...