Vučić: "I returned Law on Expropriation to Parliament, Referendum Act to be revised" 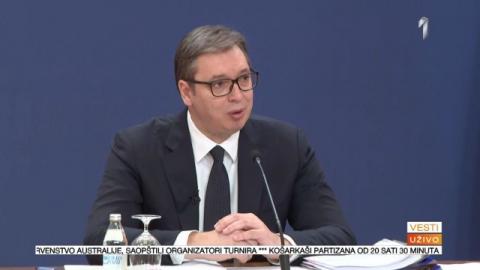 The address was dedicated to the current protests and the company Rio Tinto.
"The previous two years and the previous seven are some of the years in which we can boast of the rapid development of our country, our growth rate will be 2.7 percent. We expect two chapters or one cluster to be opened by December 14. It is possible that Serbia will be the only country to open new chapters", Vucic said.
"I am proud of all the results we have achieved, but I know that we could have done even more without the laziness of some people, but also with bureaucratic problems we had faced," he said.
"As for the law itself, as I said in previous addresses, and despite the fact that I am one of the few presidents who returned laws to the Assembly, such as the Law on Waters," he said.
"Something happened that in the desire, as I understood the people from the government, to pass the best possible law, they passed a law in which one thing was problematic for me, and that is the insanely short deadlines given to the owner of real estate, either land or house", he said.
"It was not unconstitutional, the law did not go through a public debate, due to COVID crisis, which is unacceptable", said Vucic.
"I saw ministers' flaws in taking over responsibilities that did not belong to them."
"I made a decision and signed that decision on returning the Law on Amendments to the Law on Expropriation to the parliamentary procedure," he said.
"There was a possibility of interpretation that the law could be overthrown, due to Article 58 of the Constitution, where property rights are violated. Although in many EU countries they do it even after 8 days, I certainly think that the deadlines are insanely short," Vucic said.
This means that the Law on...