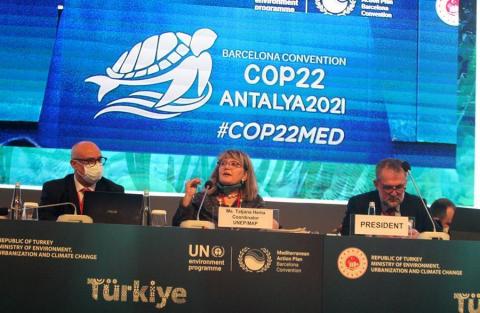 An international conference aiming to protect the Mediterranean Sea from pollution is being held with various presentations, panels, meetings and side events in Turkey's southern province of Antalya.

Representatives from 21 Mediterranean countries attended the gatherings on the environment and sustainable development in the region in line with the 22nd Meeting of the Contracting Parties to the Barcelona Convention and its Protocols (COP 22) that kicked off on Dec. 7 and was held every two years.

The issues of pollution in the Mediterranean Sea, loss of biodiversity, presence of alien species and climate change will be discussed at the four-day meeting which will last until Dec. 10.

Following the conference, Turkey will take over the task of "Barcelona Convention Secretariat Bureau" from Italy for two years.

Speaking via video conference on the first day of the COP22 meeting, Carlo Zaghi, the head of the platform, underlined the effects of climate change on the loss of biodiversity in the seas and the ecosystem at large.

Stressing that the Mediterranean region is at risk, Zaghi noted that pollution caused by the maritime and tourism sector has an important impact.

The minister also said that Turkey is focused on the country's 2053 Blue Plan, which includes long-term protection efforts for Turkey's territorial waters and coasts.

On the second day of the program, a ministerial reception was held where the 50th anniversary event of the U.N. Environment Program (UNEP) was marked with the participation...