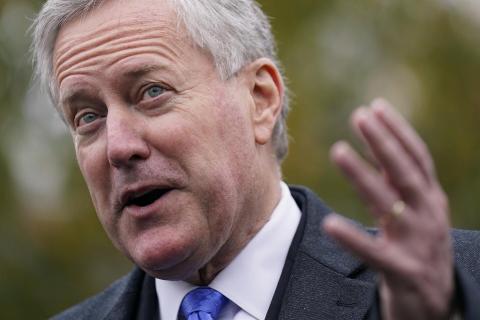 Donald Trump's former chief of staff filed suit on Dec. 8 against the congressional committee pursuing him for criminal contempt over his refusal to testify in their probe of the deadly U.S. Capitol assault.

Mark Meadows specifically names Nancy Pelosi, the Democratic leader of the House of Representatives who launched the investigation alongside all nine members of the panel preparing a report on the January 6 insurrection by thousands of Trump's supporters.

The lawsuit, filed a day after the panel told Meadows it was taking action over his defiance of a subpoena to appear for a deposition on Wednesday, challenges the legality of the "unduly burdensome" summons and asks the Washington district court to strike it down.

Meadows, who initially failed to appear before the congressional panel last month, is seen as a key witness to Trump's role in efforts to overturn the election by subverting the democratic process.

He initially snubbed a subpoena to testify before the committee but later reached an agreement on appearing in person - before reversing course again.

Reacting to his latest about-face, the panel wrote to Meadows late on Dec. 7 saying it had have "no choice" but to advance criminal contempt proceedings against him.

The letter, released by the committee on Dec. 8, added to the public record information from a trove of thousands of items of correspondence and other documents Meadows had already voluntarily turned over.

They included a November 6, 2020, text exchange with a member of Congress in which Meadows reportedly said "I love it" in a discussion about a plan to disenfranchise millions of voters in a bid to overturn Joe Biden's presidential election win.