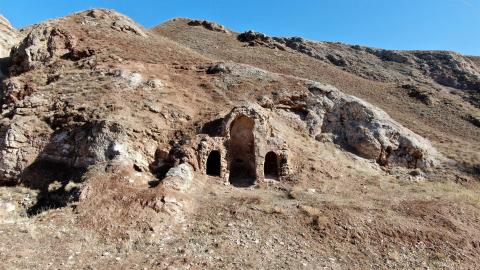 The latest evidence shows that the historical Huykesen Church in the Central Anatolian province of Sivas is one of the oldest places of worship in Anatolia.

According to the recent findings, the Huykesen Church, which is located near the Çelebiler village of the city center and believed to have been built during the Seljuk period, was once used as a place of worship about 3,000 years ago.

Officials report that the pottery pieces found in the church date back to the Old Bronze Age, Iron Age, Hellenistic, Roman and Medieval settlements. The church, which is idle today, is deemed one of the oldest known centers of worship.

Speaking about the church, Erdal Eser, professor at Sivas Cumhuriyet University's Department of Art History, said: "It is a structure built with a system known in some literature as the rock-front church or the altar church, which I find more accurate. In my opinion, it is one of the earliest dated worship structures. There is a rock structure there, and there are altars carved into the rock. When monotheistic religions and Christianity spread in this region, it still served. It is an interesting example showing that some of the places were built in rock in this region like in the Cappadocia region."

Stating that the Huykesen Church was used in later periods, he said: "Today, various groups and communities come and perform ceremonies there at certain times of the year. We see that after the Islamization of this region, the holiness of this place continued in the same way."

Stating that the church may have been built 3,000 years ago, Eser said: "As far as I know, the reason why it is called Huykesen is that children who wet the bed were taken to this place. I don't know what kind of education they were given there,...