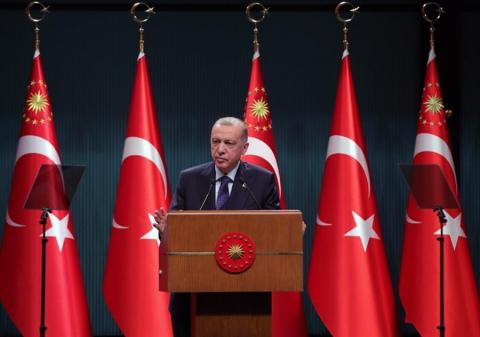 "Turkey is the breakout star of the global economic system that is being restructured with the pandemic. We should completely mobilize our country's potential to this end. No one should ever forget that every penny spent on investment and production is a brick laid for the construction of the future of the great and powerful Turkey, " President Recep Tayyip Erdoğan has said on Dec. 8 following a cabinet meeting.

Drawing attention to his visit to Qatar on November 6-7, 2021 at the invitation of Emir Sheikh Tamim bin Hamad Al Thani of Qatar for the 7th meeting of the Turkey-Qatar Supreme Strategic Committee, Erdoğan noted that the number of the memorandums of understanding between Turkey and Qatar in various areas, including politics, military, trade, economy and culture, had reached 84 with the ones signed during the last visit.

Also touching upon Abu Dhabi Crown Prince Sheikh Mohammed bin Zayed Al Nahyan's visit to Turkey last week, President Erdoğan described the visit as another sign of the revival of Turkey's relations with the Gulf region. "During the return visit we will pay in the upcoming months, we will endeavor to further advance the new era we have launched with the United Arab Emirates."

"WE SHOULD COMPLETELY MOBILIZE OUR COUNTRY'S POTENTIAL"

Underscoring that Turkey had grown by 1.8 per cent last year when the global economy had shrunk by 3.4 per cent, President Erdoğan said: "Our growth rate, mostly based on industrial production and exports, which have reached some 221 billion dollars, is moving towards a double-digit figure this year. Obviously, we do have challenges ahead, first and foremost the increase in prices caused by the global energy and food prices. I believe they will be balanced after a while...