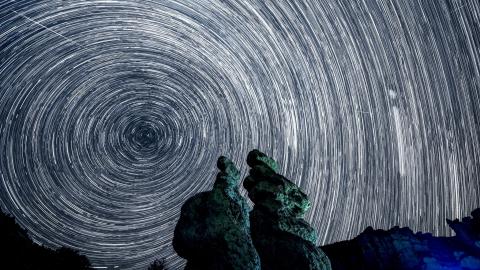 Riot policemen aflame during clashes with protesters during a rally marking the 13th anniversary of the killing of teenager Alexis Grigoropoulos in Thessaloniki on December 6, 2021. Photo: EPA-EFE/Dimitris Tosidis./small>

Greek policemen walk past pedestrians during a rally marking the 13th anniversary of the killing of teenager Alexis Grigoropoulos in Thessaloniki on December 6, 2021. EPA-EFE/Dimitris Tosidis.

Pope Francis handing a microphone back to a journalist aboard the papal plane on his flight back to Rome after visiting Cyprus and Greece on December 6, 2021. Photo: EPA-EFE/Vatican Media.

Migrants from Afghanistan at a house used by smugglers as a secret hideout while being held by Turkish security forces during an operation in the border city of Van on August 25, 2021. Photo: EPA-EFE/Sedat Suna.

Turkish feminist group Campus Witches wears costumes from the TV series "The Handmaid's Tale" during a protest against Turkey's...