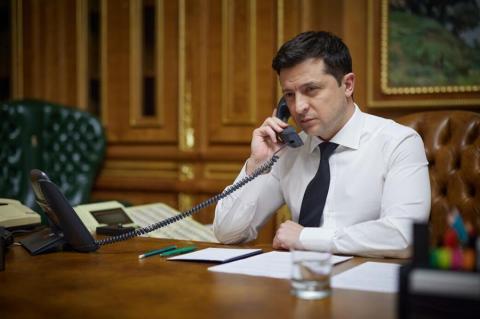 President Joe Biden gave "strong" backing on Dec. 9 to Ukraine in its struggle with Russia and urged a diplomatic solution to the conflict in eastern Europe, while promising U.S. help if Moscow attacks.

Ukraine's President Volodymyr Zelensky issued a statement thanking Biden for his "strong support" in a phone call lasting about an hour and a half.

Biden also placed a separate call to the leaders of NATO members Bulgaria, the Czech Republic, Estonia, Hungary, Latvia, Lithuania, Poland, Romania and Slovakia, which are all in eastern Europe and deeply concerned by Russian military threats to Ukraine.

They "discussed Russia's destabilizing military buildup along Ukraine's border and the need for a united, ready, and resolute NATO stance for the collective defense of allies," the White House said.

Biden had already spent two hours talking to President Vladimir Putin on Tuesday, warning him that if Russian troops now massed next to Ukraine launch a major attack, Moscow would then face U.S. economic sanctions "like none he's ever seen."

But the White House stressed that Biden, in his calls on Thursday, was also pushing for reinvigorated diplomacy, including the stalled peace talks between Ukraine and Russia.

Western and Ukrainian officials say they fear Russia - which already seized Ukraine's entire Crimea region in 2014 and also backed a...