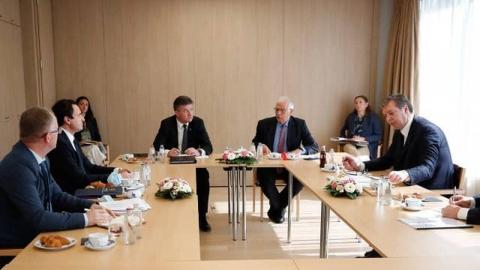 In a bid to push the governments of Serbia and Kosovo to renew the stalled EU-facilitated dialogue on normalisation of relations, 47 civil society organisations, CSOs, from both countries on Friday urged them to make more of an effort, expressing "deep concern" about a "deteriorating situation on the ground".

In a joint letter, the CSOs called on the Pristina and Belgrade governments to resume their dialogue in a substantial and sustainable manner, and "promptly implement already reached agreements".

They also called on both sides to refrain from inflammatory rhetoric against minority communities and populist narratives regarding mutual relations and history.

"Witnessing that Kosovo-Serbia relations are not improving despite the ongoing dialogue process, we express our deep concern for the deterioration of the situation on the ground and in the daily lives of citizens," the joint statement said.

"There is a need to safeguard and protect the human rights of minority groups in Serbia and Kosovo," it added.

For years, Kosovo and Serbia leaders have traded accusations over which side is responsible for the failure to implement agreements reached in Brussels since the dialogue process started in 2011, first on technical issues and then involving top political leaders.

The letter also calls on international community to support the dialogue, and says normalisation agreements "are not at the expense of democracy in Kosovo and Serbia" and should focus on substantial solutions instead of daily disputes.

The European Union, as facilitator of the process, is currently trying to arrange a meeting between Kosovo's Prime Minister, Albin Kurti, and Serbia's President, Aleksandar Vucic, in Brussels by the end of this year.