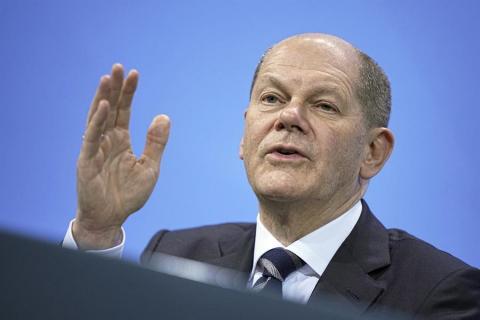 German Chancellor Olaf Scholz on Dec. 10 headed to Paris and EU and NATO headquarters, with Russia tensions and climate in the spotlight for his first foreign trip since he took office this week.

Germany's new leader has pledged continuity with his predecessor Angela Merkel, who stepped down Wednesday after 16 years in power.
Scholz took power with a disparate new coalition of ecologist Greens and business-friendly Free Democrats, which has agreed to strengthen Europe's "strategic sovereignty".

In keeping with tradition, his first official trip will take him to France where he will meet President Emmanuel Macron.
He will continue on to Brussels for meetings with NATO Secretary General Jens Stoltenberg and EU chief Ursula von der Leyen and European Council president Charles Michel ahead of a bloc summit next week.
The European response to the pandemic and the climate crisis, growing calls for a diplomatic boycott of the Olympics in China and the Russian troop build-up on Ukraine's border are set to dominate discussions.

Scholz on Thursday already warned Moscow of "consequences" for the Nord Stream 2 pipeline, a Russian project to deliver natural gas to Germany and a major source of friction with many partners.
As Western powers threaten punishing new sanctions against Moscow, the project could soon play a central role.
"With Nord Stream 2, Germany has the big geopolitical weapon in its hand without ever having sought it," said analyst Ulrich Speck of the German Marshall Fund.

Laying the groundwork for the visit, new Foreign Minister Annalena Baerbock of the Greens said in Paris Thursday that Berlin would set its stance on Russia and China in close consultation with European allies.
She praised...