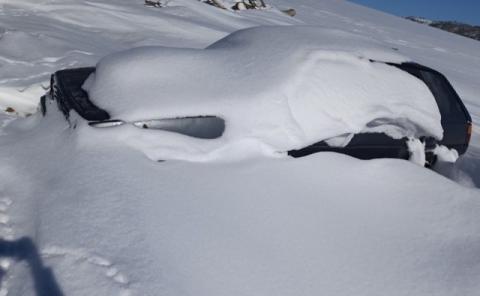 Mountain Service teams are trying to break through. According to the media, the rescuers of this service set off on special skis towards them.
"We are going by car as far as we can, and the rest by special skis, but we have not arrived yet," they say in the Mountain Service, the media report.
They add that that part is very snowy and that specially trained people go to the captured equipped with special skis.
"As far as we know, there are children in that group," they said in the Mountain Service. These are several families with children who love "off-road driving", who went to a family gathering in the area of ​​Maljen, but their four jeeps got stuck in the snow debris on the macadam road Maljen-Ravna Gora, in the region of Bogdanica, about 9 kilometers from Tometino polje. Yesterday, after the unidentified person reported to the police that he saw them, the Fire and Rescue Brigade from Valjevo first got in touch with them. One of the young men told them that they had run out of fuel.
They moved things from two wrecked vehicles to two other jeeps, which were located in an unspecified place near the river Tinja at the foot of Maljen. Then, they managed to walk to the empty hunting lodge Ribnica where they set fire and said that they are not in a life-threatening situation, but that they have no food.
The teams of the Fire and Rescue Brigade tried to move in their direction and deliver food to them, but due to extremely bad weather conditions, they did not succeed.