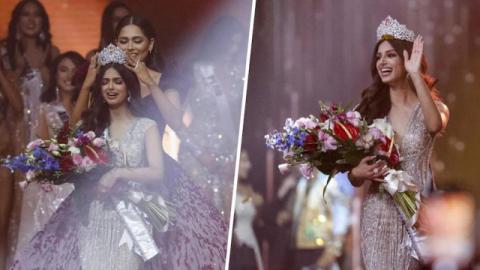 The representative of India Harnaaz Kaur Sandhu became the winner of the "Miss Universe" contest, which took place in the Israeli resort town of Eilat on the Red Sea, the Associated Press reported.

The Indian, a Bollywood actress, received the crown from her predecessor Andrea Meza from Mexico.

The competition included a traditional presentation of national costumes, swimsuits and interviews with participants to demonstrate their public speaking skills.

The contest came to light as it was organized in Israel amid calls for a boycott of the country over its treatment of the Palestinians. In the end, only Malaysia did not send a representative, officially indicating the coronavirus for its decision.

In an interview last month, Andrea Meza spoke out against the politicization of the competition in Israel.

A representative of the Israeli Ministry of Tourism explained that the country was chosen as the host because of its successful vaccination program against COVID-19.

However, due to the Omicron variant, Israel was forced to close its borders to foreign tourists at the end of last month. Most of the title contenders had already arrived in the country before the new restrictions were introduced. Those who delayed received special permission to enter, but with a condition of 72-hour quarantine, according to the AP.