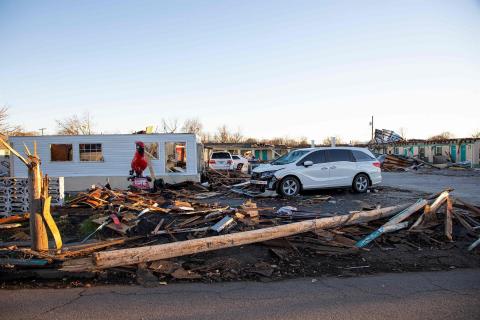 Workers on the night shift at Mayfield Consumer Products were in the middle of the holiday rush, cranking out candles, when a tornado closed in on the factory and the word went out: "Duck and cover."

Autumn Kirks pulled down her safety goggles and took shelter, tossing aside wax and fragrance buckets to make room. She glanced away from her boyfriend, Lannis Ward, and when she looked back, he was gone.

Gov. Andy Beshear initially said on Dec. 11 that only 40 of the 110 people working in the factory at the time were rescued, and that "it'll be a miracle if anybody else is found alive in it." But on Sunday, the candle company said that while eight were confirmed dead and eight remained missing, more than 90 others had been located.

Dozens of people in several Kentucky counties are still believed to have died in the storms, but Beshear, after saying on Dec. 12 morning the state's toll could exceed 100, said that afternoon it might be as low as 50.

"We are praying that maybe original estimates of those we have lost were wrong. If so, it's going to be pretty wonderful," the governor said.

Kentucky was the worst-hit state by far in an unusual mid-December swarm of twisters across the Midwest and the South that leveled entire communities and left at least 14 people dead in four other states.

At the candle factory, rescuers had to crawl over the dead to get to the living at a disaster scene that smelled like scented candles.

But by the time churchgoers gathered Sunday morning to pray for the lost, more than 24 hours had elapsed since anyone had been found alive in the wreckage. Instead, crews recovered pieces of peoples' lives, a backpack, a pair of shoes and a cellphone with 27 missed messages were among the items.