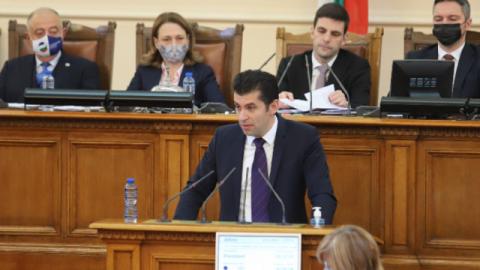 Kiril Petkov is the new Prime Minister of Bulgaria. He became the head of the Council of Ministers after receiving the support of 134 deputies from "We Continue Change", BSP, "There Is Such a People" and "Democratic Bulgaria". Today, the National Assembly held an extraordinary sitting to approve the country's new government.

On Saturday, the WCC co-chair received a mandate to form a government from President Rumen Radev. Petkov returned it immediately - fulfilled. Then it became clear the composition of the cabinet, which includes representatives of the four parties that signed the coalition agreement.

"Today is an important day to continue the change. The change of thinking and the change of management. Our first task is to realize that if we want a better future for Bulgaria, we must work together. Together with the four coalition partners, we made a 120-page coalition agreement, 18 chapters on the policies that will be needed for change,"Petkov said in a speech from the parliamentary rostrum before the vote on his nomination.

He also promised to be the prime minister of all Bulgarians. "There will be no distinction, because in every municipality there are Bulgarians who hope for a better way of life. I will be first among equals. Only as a team will we be able to achieve all these goals,"Petkov said.

The prime minister also noted the role of the opposition. "I call you - follow our every step! Watch out for our every mistake! What we manage is not our money - but that of Bulgarian citizens. I count on you to be constructive and critical of our actions,"he appealed.

Petkov also called for constitutional changes. "Let's forget our personal, political and any other goals. We have national interests...