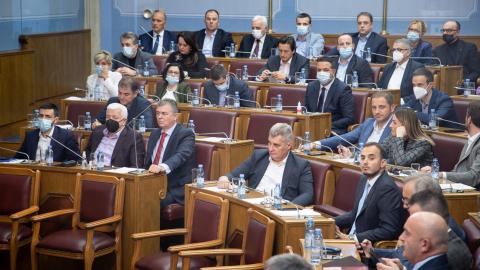 "Having in mind that the Democratic Front announced an initiative to organise early elections, we believe the negotiations should begin without delay. We are convinced that a new parliamentary majority will be formed and, in that way, the necessary preconditions will be created for the fall of the government," a joint statement by the opposition said.

On December 11, the largest single faction in the ruling majority, the pro-Serbian Democratic Front, demanded early parliamentary elections after the collapse of negotiations on a cabinet reshuffle.

For months, the Front has been demanding a reshuffle to bring party-political ministers into the cabinet to replace non-party experts, but Krivokapic and the smallest bloc in the ruling majority, Black on White, refused the demand.

One Democratic Front leader, Andrija Mandic, called on other ruling blocs to negotiate on shortening the government's mandate and hold elections in spring 2022.

"This situation is unsustainable. We will propose to the parliamentary majority and national minorities parties to return the mandate to the citizens of Montenegro and that new elections are organised," Mandic said.

In the no-confidence motion, the opposition accused the government of creating political and institutional paralysis and of halting Montenegro's European integration.