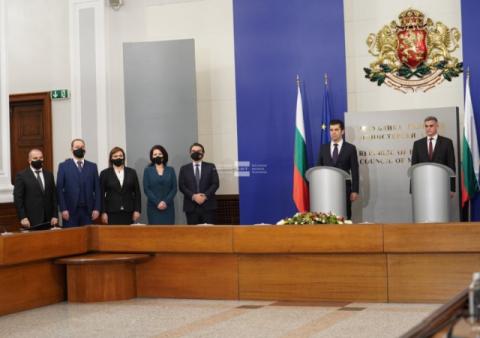 The handover ceremony began at 17:30 p.m. In the beginning, the caretaker Prime Minister Stefan Yanev said that he hoped his cabinet had made Bulgaria different and hoped to leave what was the credo of the new rulers - "change".

He then handed over power to Kiril Petkov

Kiril Petkov: So far we made promises, now the actions begin

"We have worked side by side with many of you, we have had difficult tasks with many of you. The change of the old model has begun. I am the first among equals," said Prime Minister Kiril Petkov.

Then Kiril Petkov reiterated to journalists that there are two urgent priorities - measures against electricity prices and the COVID crisis. He again called for vaccination, announcing that he would attract experts from various fields, including Prof. Radka Argirova to explain to people with chronic problems how vaccines would affect their diseases.

"I have not been threatened and as you saw me with a poster: 'I'm not afraid,'" said Kiril Petkov, adding that he did not know who had threatened Itzo Hazarta.

Asked about the war between the government and the prosecution, he said he hoped investigators would monitor his government's work and called for judicial reform.

The new Prime Minister Kiril Petkov is already in the meeting room of the Council of Ministers, where he gave an interview to BNT. He demanded measures from the new Minister of Energy Alexander Nikolov to prevent household consumers from entering the free market.

He then repeated his other urgent...