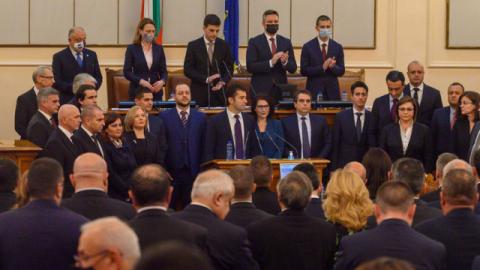 Exactly at 16:01 p.m. Kiril Petkov was elected Prime Minister of Bulgaria. His candidacy was accepted by 134 votes to 104.

GERB, DPS and Vazrazhdane voted against. The result was met with loud applause.

238 deputies were present in the hall.

Again, MPs from GERB, DPS and Vazrazhdane voted against.

With this vote, the mandate of the caretaker cabinet was terminated. Immediately afterwards, the oath of the new cabinet followed in the plenary hall.

On Friday, MPs from "We Continue the Change", BSP, "There Is Such a People" and "Democratic Bulgaria" collected the necessary signatures for an extraordinary session of the National Assembly. The next day, President Rumen Radev handed over a mandate to Kiril Petkov, who immediately returned it to him. Hours later, Petkov's draft cabinet was presented in the parliament building.