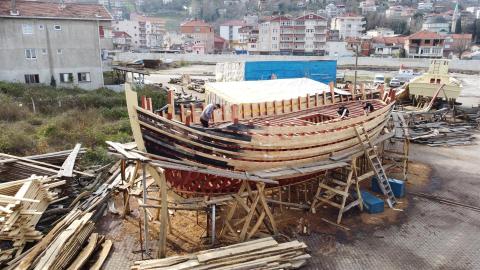 Old-style single-masted boats are being built for tourism purposes at a historic dock in the Black Sea province of Bartın, where galleys and galleons were built for the Ottoman navy after the 1500s, for the first time in 50 years.

In the district of Kurucaşile, where wooden ships were produced to be used in naval wars for the Ottoman Empire, the tradition of single-masted boat construction passed down from generation to generation still continues.

Shipbuilder Mustafa Dikyol said that for the first time in 50 years, an old-style, single-masted wooden boat will be built in a small shipyard in the district.

Chestnut and oak trees unique to the region are used in the construction of the 18-meter-long and 6-meter-wide boat.

The outer coating will be done following the skeleton of the boat is completed and it will be delivered to the person who ordered it next May or June, depending on the weather conditions, according to Dikyol.

"Boats, which used to be built with the knowledge, experience and molds of the masters, are now being built with technological means," Dikyol said, noting that only six masters are involved in the project, which will be used for tourism purposes after launching.