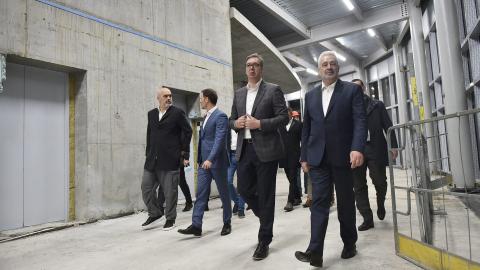 "US allies are showing the desire to make Montenegro a member of this initiative, although it's far from being in the Montenegrin interest. So many unstable countries coming into the project will destabilise and ruin the project itself. These countries are simply not at the level of development for such ambitious goals," Vujovic told BIRN.

He claimed that the scheme, which involves lifting barriers on the movement of goods and people between Balkan countries, has risks that are difficult to eliminate at the moment because of the limitations of the countries involved.

"Removing border crossings would not only enable unhindered movement of goods and persons but also remove obstacles to unhindered smuggling of narcotics and cigarettes," he said.

"Criminal groups would get unhindered movement, and countries in the region do not have their own or shared security resources to prevent or limit these phenomena," he added.

At a summit in 2019, Albanian Prime Minister Edi Rama, that time North Macedonian PM Zoran Zaev and Serbian President Aleksandar Vucic committed to working together on the initiative.

They also invited other Balkan countries, but Montenegro, Kosovo and Bosnia and Herzegovina have not joined so far.

Bosnia and Montenegro have said they see no particular benefits from it, as easing travel and trade are already covered by the wider CEFTA trade agreement between countries in South-East Europe, while Kosovo's premier Albin Kurti has said that he would prefer an improved version of the CEFTA agreement.