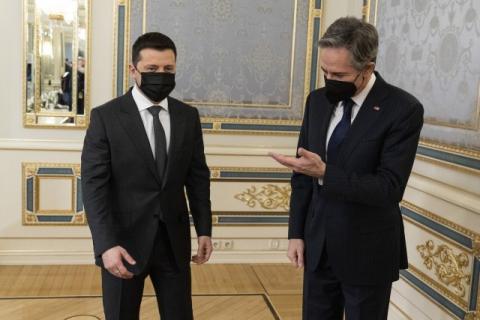 Blinken immediately warned that Russia could carry out the attack "in a very short time".
"As you all know, in the last few months we have been engaged in an intensive focus on Ukraine due to the significant accumulation of Russian forces we saw near the Ukrainian border," Blinken said in a conversation with Ukrainian diplomats at the US Embassy in Kiev, Reuters reports.
Blinken claims that the accumulation of Russian forces took place "without provocation and without reason".
"We know that there are plans to increase that strength even more in a very short time, and that gives President Putin the capacity to take further aggressive actions against Ukraine, also in a very short time," Blinken said.
He added that Russian actions attracted the attention of Washington, but also of American allies in Europe and beyond. Last month, the administration of US President Joseph Biden approved an additional $ 200 million in defense security assistance to Ukraine.
State Department spokesman Ned Price said the goal of Blinken's visit was "to reiterate our support for Ukraine's sovereignty and territorial integrity."
Blinken will meet today with Ukrainian President Volodymyr Zelensky and Foreign Minister Dmitry Kuleba.
He will then meet in Berlin with German Foreign Minister Annalena Baerbock, and later with the Transatlantic Four, a format that includes the United States, Britain, France and Germany.
After that, a meeting with the Minister of Foreign Affairs of Russia, Sergey Lavrov, is planned in Geneva.