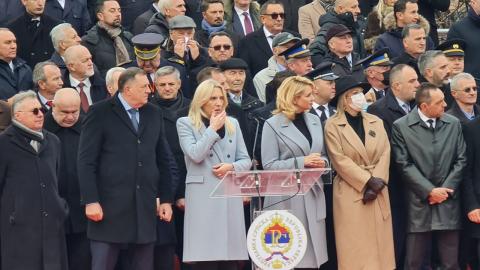 A Russophile, Mariani is well-placed to secure a prominent spot in any Le Pen presidency should she manage to beat incumbent Emmanuel Macron, a victory that would have far-reaching consequences for the geopolitical balance of power in Europe and, potentially, for the fate of Bosnia.

"The support of conservative leaders for Republika Srpska at a time when the country is facing secession gives legitimacy in terms that the support does not only come from China or Russia but also from Europe, which is very important bearing in mind that European Union accession is one of the priorities for Bosnia and Herzegovina," said Ivana Stradner, a visiting research fellow at the American Enterprise Institute, a public policy think-tank in Washington.

Richard Kraemer, non-resident senior fellow at the Czech-based European Values Center for Security Policy, said Mariani was one to watch given his potential influence over foreign policy should Le Pen win office and his "over Russophilia".

"Should RN [National Rally] win the elections, he is influential enough to quite possibly secure a key foreign policy position in such a government. Indeed, there would be toasts in the halls of power in both Budapest and Moscow."