Bulgarian PM on North Macedonia: In a Few Days we Achieved more than in Recent Years 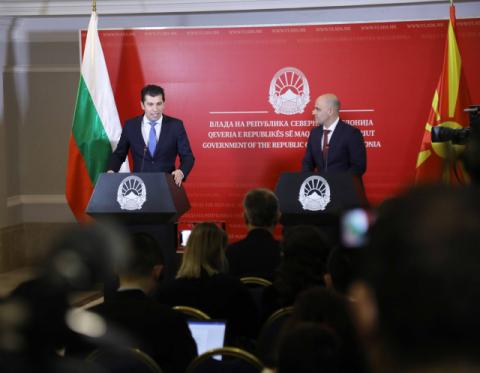 "In a few days, we have achieved positive steps, which have not happened in recent years. This is the result of our constructive approach and mutual assistance. Our aim is for true good neighborliness with real results," Prime Minister Kiril Petkov told Bulgarian media.

Petkov gave an example with the Sofia-Skopje airline, which is expected to become a reality as soon as possible. The Prime Minister clarified that the calendar of the working groups has already been agreed upon, including the date of the upcoming intergovernmental meeting on January 25.

"The fate of our countries depends on ourselves and the work we do. When a constructive approach is used and trust is the main basis of communication, the results and deadlines for achieving them are different," said the prime minister.

Regarding the air-line connection between Sofia and Skopje, the Prime Minister commented that it should be structured in such a way that its effectiveness does not depend on politicians. "The line must be organized in such a way as to operate on an economic basis. This is a matter of approach and schedule, a matter of connectivity with other flights," Petkov said. In this context, the Prime Minister added that at yesterday's meetings some of the tourist packages of Bulgaria and the Republic of North Macedonia were discussed to be common in order to attract more tourists to the Balkans.

Regarding the future railway connection Sofia-Skopje, Prime Minister Petkov explained that the details of the project are still being clarified and the Ministers of Transport of Bulgaria and the Republic of North Macedonia will...