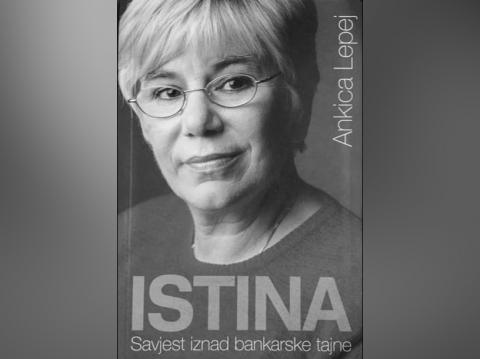 Ankica Lepej, perhaps the most famous whistleblower in the history of Croatia, has died of COVID-19 complications in Zagreb, Sanja Sarnavka, the human rights and women's rights activist, wrote on her Facebook profile.

"Ankica Lepej, our courageous and good fellow citizen, did not manage to beat COVID-19. I'm sorry. She showed us how to love your homeland in the right way. She paid a huge price for her act of civil courage, but she never regretted it", Sarnavka wrote.

In 1998, working as a clerk in Zagrebacka banka, Lepej found that Ankica Tudjman, wife of then-president Franjo Tudjman, had deposited 210,000 German marks and 15,000 dollars in her bank account - a huge sum for the time.

President Tudjman had not reported the large sum in his asset declaration, and Lepej decided the public needed to know this. The revelation was published in Jutarnji list by the journalist Orlanda Obad.

Zagebacka banka then published an advert in Jutarnji list offering a million kuna reward for information on who leaked the data. Lepej went to the bank and told them she was the whistleblower.

"That was the hardest night of our lives. The ad in Jutarnji was like a Wild West 'wanted' sign. We were scared for our children. The next evening, we went to the bank with the lawyer Vesna Alaburic and reported that I was the whistleblower. I never took the million-kuna reward," Lepej told the media afterwards.

Instead, she was fired from her job. "The police took me to the police station. I was fired immediately, but the indictment was dropped because they were afraid what might come out during a trial," Lepej added.

Her husband, Slavko, was unemployed at the time because the company he had worked for, Tiskara Zagreb,...