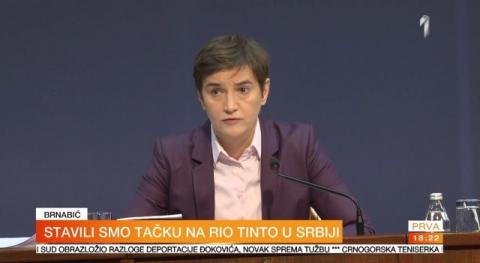 "We have the requests of environmental organizations. These are the requests that were submitted to the Government on January 12, 2022," the Prime Minister said at a press conference immediately after the government session.
At the final session, the Government Decree on the spatial plan was revoked, Brnabi pointed out.
"The spatial plan has been abolished and no longer exists. Therefore, all administrative acts related to the company Rio Tinto or Rio Sava Exploration have been annulled," she added. "We never had contracts, as we have said many times," Brnabic said.
She reminded that protests had been held in recent months regarding the Jadar project and the Rio Tinto company, i.e. its daughter company in our country, which has been in Serbia since 2004, when, she said, it received the first decision allowing research actions.
Brnabic added that the Mining Law was amended in 2006, which introduced the principle of continuity, which means that the explorer has the exclusive right to exploit, and that in 2012 the company received a decision on the construction of large diameter wells.
"And so on, until today, until 2022. We have the requests of environmental organizations, which were submitted to the government on January 12, 2022," Brnabic said and repeated all the requests, which the government adopted at today's session.

"As far as I remember, in 2006, when Rio Tinto received the permit, Democratic Party was in power, and President Boris Tadic. Today, the same people block traffic, along with border crossings. It is not clear to me if these protests are environmental, why didn't you ask Nebojsa Zelenovic why they gave permission and brought Rio Tinto to Serbia, and today they are trying to build their political future on that...