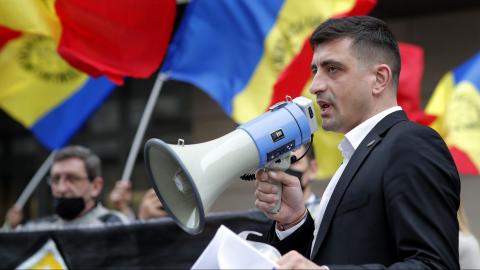 "Anti-Semitic discourses have not disappeared from Romanian political life in the last 30 years," said Oliver Jens Schmitt, professor of Southeast European history at the University of Vienna.

"AUR is trying to address as large a group of protesting voters as possible," he said, and politics is getting in the way of any substantive response.

Of the parties in power, the Social Democratic Party, PSD, sees AUR "as a potential partner" and is only likely to react if AUR encroaches on it in opinion polls, Schmitt told BIRN, while PSD's partner in government, the National Liberal Party, PNL "currently has a huge credibility issue."

That leaves Union Save Romania-PLUS Party, which, said Schmitt, "has so far avoided substantive arguments."

Anti-Semitic messages 'attractive' to some

The row erupted in early January when AUR issued a statement describing sex education and the history of the Holocaust as "minor issues" that do not merit full "study classes" in schools.

Accusing the education of ministry of "undermining the quality of education in Romania," the party said the sciences and Romania language, literature and history were losing out under a new law.

Protesters climb on the fence and get in the yard of the parliament during the 'No Green Pass' rally organized by AUR in front of the Parliament building in Bucharest, Romania, on December 21, 2021. Photo: EPA/Robert Ghement

On January 10, prosecutors announced an investigation into the statement. Under Romanian law, Holocaust denial, approval, justification or revisionism carries a potential punishment of between six months and three years in prison or a fine, but there is no precedent when a political party is in question.