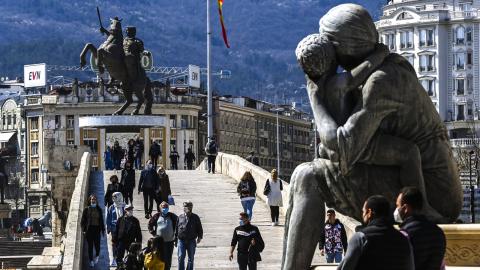 Protesters are seen during a rally outside the Rio Tinto office in Perth, Australia, 09 June 2020, after it detonated explosives in an area of the Juukan Gorge in the Pilbara, destroying two ancient deep-time rock shelters. Photo: PA-EFE/RICHARD WAINWRIGHT

As 2022 kicks off, the fate of Rio Tinto's lithium mining project in Serbia seems to be hanging in the balance. Public opposition and outrage over pollution-related fears tied to the mining project have generated protests and flash road blockades in Serbia in 2021, gaining in intensity towards the end of the previous year.

The current Serbian Government has wholeheartedly backed the mining project. Yet with Parliamentary and Presidential elections coming into view in April, the government of Prime Minister Ana Brnabic is backpedalling fast. Yet it is also warning the public that backing out of the project could result in legal suits against Serbia. Our analysis takes a look at the likely fate of the project, as well as whether fears of financial damages are real or - scaremongering by a Government trying to salvage the project.

For Turkey, 2021 was a year in which almost everything got worse. Much worse. Inflation soared, while the lira lost value at an astounding pace, impoverishing many ordinary Turks. Nor was the country's tense and confrontational politics much to boast about.

Sadly, as our analysis of what lies in store for Turkey in 2022 suggests, there is little reason to hope that things will improve this year....