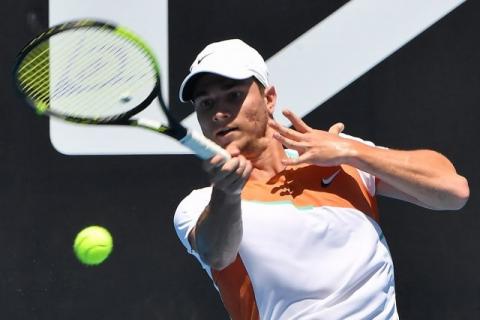 After the saga about Novak Djokovic, few people hoped that Serbia would have an ace up their sleeve in the second week of the tournament, but there is one: Miomir Kecmanovic!
The guy from Belgrade achieved the Grand Slam result of his career by placing in the eighth finals in Melbourne and who knows where he will end up. As I have already said, this is a Serbian route, Mia is definitely walking on it for now.
He and David Nalbandian, his coach, drive an exciting Australian rally!
Finally, for Kecmanovi, who, like many of our players, was often unlucky with the draw, the dice were arranged nicely. Blue Melbourne brain, with Serbian motif. To remind the Australians that even without Novak, there is someone to constantly remind them that good tennis is still played here. But also to remind them constantly what sin they have committed.
How many of you said that after the disappointment about everything that happened before the start of the tournament, they will not follow the events in Melbourne? I am very sure, but I know it will not be like that - Serbia will be awake on Sunday, along with its remaining eagle in the sky over Melbourne, Miomir Kecmanovi.
As a junior, Mia recorded great results, brought trophies and medals from numerous competitions, it was clear to everyone that he has great potential, as soon as at the age of 13, across the Atlantic, he entered the world of uncertainty, stopping in Bradenton, Florida, in the famous IMG academy of Nick Bollettieri, through which many players have passed, from Monica Seles, Andre Agassi, Maria Sharapova, not to mention them all.
With him, at that crucial time, was mostly his aunt, who took care of him, while Mia slowly absorbed his knowledge and paved his way through the dense...