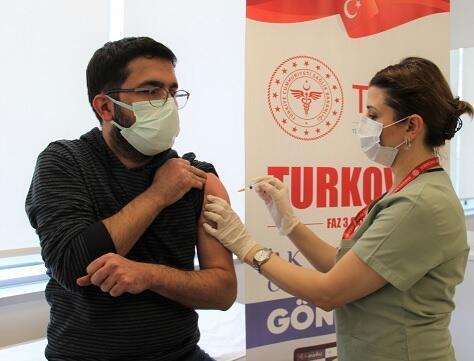 Turkey will give a dose of a locally developed COVID-19 vaccine, Turkovac, to those who have already received two doses of the Pfizer/BioNTech jab, Health Minister Fahrettin Koca has said.

"This will be the first study of its kind in the world in which an inactivated vaccine will be administered after an mRNA jab. The respective study will commence on Monday [Jan. 24] at the Ankara City Hospital," Koca told reporters on Jan. 19 following a cabinet meeting.

"The Ethics Committee has given its permission for the study to go ahead. We will observe how the antibody level changes," the minister added.

Turkey started to use Turkovac in its vaccination drive at the end of last month. Before that, it was using the vaccines developed by Pfizer/BioNTech and the Chinese company Sinovac.

The trials showed that Turkovac, which appeared to be as safe as the Sinovac, is 50 percent more effective than the Chinese vaccine, researchers said.

Since it rolled its jab drive in January last year, Turkey has administered nearly 140 million doses of the vaccines against COVID-19.

More than 52 million people, which correspond to over 84 percent of the population aged 18 and above, have been double jabbed to date, while close to 24 million people have been given a booster shot.

The number of people who have received at least one dose of the vaccine has exceeded 57 million.

Meanwhile, Koca warned in a tweet on Jan. 19 that COVID-19 poses greater risks and threats to the elderly than other age groups, as hospitalization rates show.

"According to the latest data, people aged 65 and over account for 8 percent of all [the...