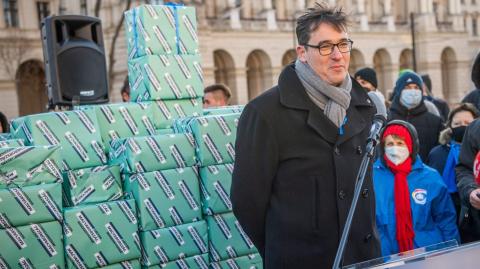 Critics say the cost of the campus would be higher than what the government spends each year on running all of the country's state-run universities. The contract is also classified, just like the other big Chinese project in Hungary, the construction of a new Belgrade-Budapest railway.

Budapest mayor Gergely Karacsony, who has been critical about the project from the beginning, initiated the referendum, but was backed by the broad alliance of opposition parties, including leftists, liberals, centrists and the former extreme-right.

The referendum would include two questions: the first would repeal the law on the transfer of assets to the Fudan Hungary University Foundation; the second would extend the maximum duration of unemployment benefit from 90 to 270 days.

According to the constitution, 200,000 signatures are needed for a question to initiate a referendum.

Many observers had doubted that the opposition, which only started its campaign before Christmas, would be able to reach the threshold.

"This is an important symbolic victory for the opposition, a positive message that they have achieved something together, regardless of the timing or the outcome of the referendum," Andrea Szabo, senior research fellow of the Centre for Social Sciences at the Institute for Political Science told BIRN.

The opposition visibly lost momentum after its successful primaries in October 2021, which ended with the surprise victory of conservative mayor Peter Marki-Zay, so this could be the start of a new beginning, she added.

The National Election Office has now 60 days to prove...