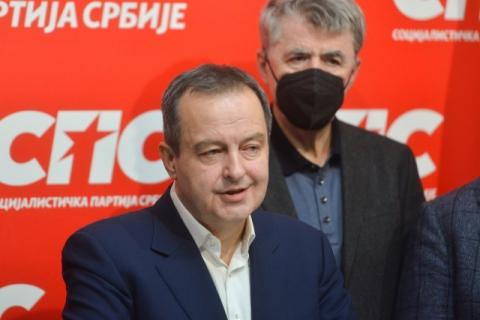 Ivica Dacic told TV Pink that he would not do that because he would not like to jeopardize the possibility of the incumbent president, Aleksandar Vui, winning in the first round of elections.
"We have been cooperating for ten years and I do not want it to be interpreted that I am on the side of those who want to overthrow him. We are trying to win in the first round," Dacic told Pink TV.
Dacic said that the decision on whether the SPS will run in the elections independently or in a coalition with the Serbian Progressive Party (SNS) will be made on the basis of public opinion polls, by February 1st.
He stated that the SPS will support Aleksandar Vui for the second term as President of Serbia if he runs, but that otherwise that party will have its own candidate. Commenting on the allegations of some opposition parties that a part of the votes in the referendum on amending the Constitution of Serbia was falsified, Dacic assessed that as "search for an alibi" before the upcoming elections, which should be called on February 15.
Dacic added that a set of election laws would be discussed today at a meeting of the Control Body for the Implementation of Agreements from the Inter-Party Dialogue with some opposition parties.