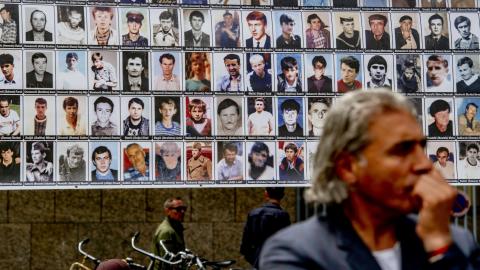 "At the [defence] ministry there were many people working on these cases, from lawyers to administrative support. In total there have been seven or eight reports of more than 100 pages each. These have to be evaluated by employees of the ministry, but that is paid from the general budget and therefore we don't know exactly how much was spent on the Srebrenica cases," said van der Sluijs.

He said that the defence ministry also engaged external consultants and established special committees, which cost even more money, so the total amount might be more than twice as much as 2.6 million euros.

As well as the Mothers of Srebrenica's case for compensation, the legal costs also include payments made to the state attorney's office to act in cases brought by Hasan Nuhanovic, a Srebrenica survivor and former translator for the Dutch UN peacekeepers, and the family of Rizo Mustafic, who was killed by Bosnian Serb forces. In these cases, the Dutch court ruled that the Dutch state was liable for the deaths of three Bosniak men. Nuhanovic and the Mustafic family received compensation.

Alma Mustafic, daughter of Rizo Mustafic, who worked for the Dutch UN peacekeeping battalion as an electrician and therefore had a right to stay at the UN base, but was sent away and then killed, said she was not surprised by the revelation of the huge legal costs incurred by the Dutch state.

"Every time we were at the court there were so many lawyers. The [Dutch] advocates knew from the beginning that it was a lost case for them. I remember the judge told them: 'The Mustafic family might win this and then the consequences will be even greater. Are you sure you want to continue like this?'" Alma Mustafic recalled.

"It was so clear that the state was guilty and...