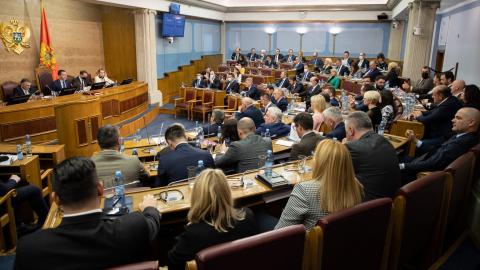 One of the Democratic Front leaders, Andrija Mandic, on Thursday said the current crisis should be solved within the ruling majority, warning that the opposition and former ruling Democratic Party of Socialists, DPS, shouldn't be allowed back into control.

"The Democratic Front will try to hold talks with the leaders of the ruling parties to reach a solution because only the Democratic Party of Socialists benefits from these quarrels. If we cannot agree on a new government, early elections are the only solutions," Mandic said.

The political crisis within the ruling majority escalated on January 19, when the smallest ruling bloc, Black on White, and opposition parties, proposed a no-confidence motion in the government, saying they needed to see if it still had the support of the majority in parliament.

The no-confidence proposal came after, on January 17, the leader of Black n White, Deputy PM Dritan Abazovic, called for the formation of a minority government to overcome the political stalemate.

Prime Minister Krivokapic and others accused Abazovic of proposing political fraud and called for his dismissal, and for Minister of Finance and Social Care Milojko Spajic to become the new Deputy PM.

On Friday, the government proposed shortening parliament's mandate as a way of moving to early elections, while speaker Aleksa Becic scheduled the vote for February 3. Abazovic's dismissal will be voted on the same day.

Media reports said that Black on White and the opposition could shortly propose speaker Becic's dismissal instead.

Under the rules of procedure, all votes must have the support of at least 41 MPs in the 81-seat chamber to pass. That...