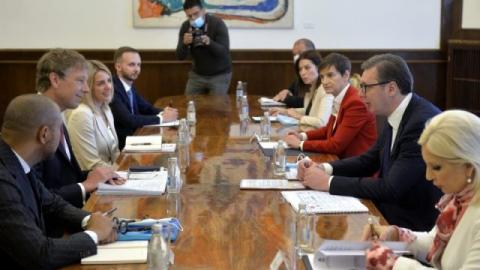 After Serbia's government on Wednesday revoked a key decree greenlighting Rio Tinto's controversial lithium mining project, activists said they did not trust government promises that the mining project is over for good, fearing what might happen after elections in April.

The Association of Environmental Organizations of Serbia, SEOS, announced that the fight would continue, noting that Prime Minister Ana Brnabic had not clarified many points.

"She did not say what we will do with the damage and with the wells that are leaking, she did not say whether she will ban research into lithium and boron. She did not tell us … who from her government persistently pushed the project," SEOS stated on Twitter, announcing a public protest on Saturday.

Savo Manojlovic, from the NGO Kreni-Promeni, who was behind the idea of road blockades, said the repeal of the government decree on changing the spatial plan of Loznica in western Serbia for the Rio Rinto project was only one of the conditions his organisation had set for calling off protests, The second condition remains - total ban exploitation of boron and lithium for 20 years.

"Also, they need to explain why we banned Rio Tinto from digging in Jadar [near Loznica], but left Eurolitium to dig around Valjevo [in western Serbia]. They are also literally setting themselves up to pay compensation to Rio Tinto," Manojlovic wrote on Twitter.

A representative of the NGO Environmental Uprising, Aleksandar Jovanovic, Cuta, congratulated all the citizens who fought against the lithium mine and Rio Tinto, but also announced the continuation of the fight against other environmentally problematic mining projects.

"Rio Tinto is not the only mining company; we have 50 new mines that have been included...