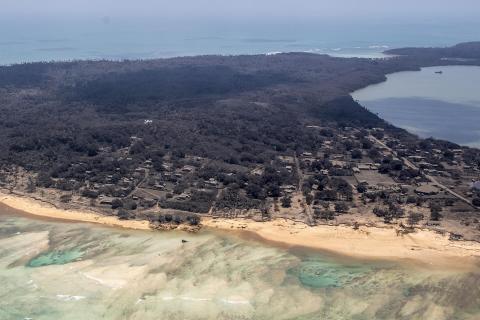 Tonga's volcanic eruption felt like an "atomic bomb" that shook "the whole island", an aid worker told AFP on Jan.21, as the Pacific nation raced to address a drinking water shortage.

Almost a week after the Hunga Tonga-Hunga Ha'apai volcano exploded, unleashing a tsunami and cutting Tonga off from the rest of the world, witnesses are recounting the disaster.

On Tongatapu, Tonga's main island, "we felt a big... it was like an atomic bomb," said Sione Taumoefolau, the secretary general for the Tonga Red Cross.

"The whole island shake because of the noise of the eruption."

The situation remains difficult, with only limited supplies of aid getting in and residents facing a massive clean up effort.
"The worst part, for us, is the ash. Everywhere we are being covered by the ashes from the volcano," Taumoefolau said.

"Prior to the eruption, the majority of Tongans relied on rainwater," Veitch said. "If it's all basically made toxic by the by the ash, then they have a problem, unless they have access to groundwater sources."

Determining the location of and access to groundwater sources is now vital, he said.

Water testing has begun, but after last Saturday's eruption "the entire country is covered in ash", Veitch said.

The relief effort got under way in earnest on Thursday after Tonga's main runway was cleared of ash, allowing the arrival of military aid flights from Australia and New Zealand.

But the sheer distance, crippled communications, and the bid to keep Covid out of the kingdom of 170 islands are...