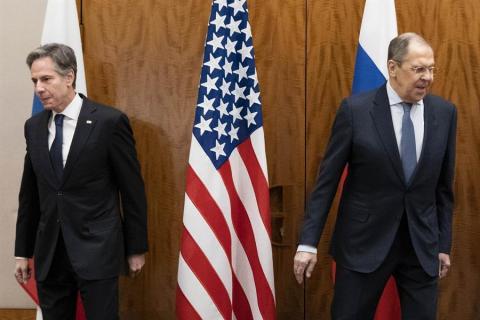 The United States and Russia sought to lower the temperature on Jan. 21 in a heated standoff over Ukraine, even as they said no breakthrough was imminent in the crisis that has raised fears of a possible Russian invasion.

Armed with seemingly intractable and diametrically opposed demands, U.S. Secretary of State Antony Blinken and Russian Foreign Minister Sergey Lavrov met in Geneva at what the American said was a "critical moment."

With an estimated 100,000 Russian troops massed near Ukraine, many fear Moscow is preparing an invasion although Russia denies that. The U.S. and its allies are scrambling to present a united front to prevent that or coordinate a tough response if they can't.

"We didn't expect any major breakthroughs to happen today, but I believe we are now on a clearer path to understanding each other's positions," Blinken told reporters after the meeting.

Blinken said Lavrov repeated Russia's insistence that it has no plans to invade Ukraine but stressed that the U.S. and its allies were not convinced of that.

"We're looking at what is visible to all, and it is deeds and actions and not words that make all the difference," he said.
Lavrov, meanwhile, called the talks "constructive and useful" and said that the U.S. agreed to provide written responses to Russian demands on Ukraine and NATO next week. That could at least delay any imminent aggression for a few days.
But Lavrov declined to characterize that pledge.
"I can't say whether we are on the right track or not," he told reporters. "We will understand that when we receive the U.S. written response to all of our proposals."
Moscow has demanded that the NATO alliance promise that Ukraine _ a former Soviet republic _ will never be allowed to join....