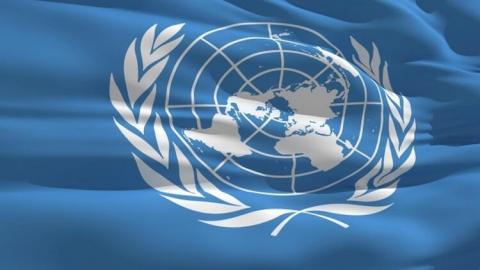 The U.N. General Assembly approved an Israeli-sponsored resolution on Jan. 20 condemning any denial of the Holocaust and urging all nations and social media companies "to take active measures to combat antisemitism and Holocaust denial or distortion."

The 193-member world body approved the resolution by consensus -- without a vote -- and with a bang of a gavel by Assembly President Abdulla Shahid who met with a group of Holocaust survivors before the assembly meeting. Israel's No. 1 enemy, Iran, "disassociated" itself from the resolution.

The ambassadors of Israel and Germany, which strongly supported the resolution, stressed the significance of the resolution's adoption on Jan. 20: It is the 80th anniversary of the Wannsee Conference where Nazi leaders coordinated plans for the so-called "Final Solution of the Jewish Question" at a villa on the shores of Berlin's Wannsee Lake in 1942 during World War II.

The result was the establishment of Nazi death camps and the murder of nearly 6 million Jews, comprising one-third of the Jewish people. In addition, millions of people from other nationalities, minorities and targeted groups were killed, according to the resolution.
"We now live in an era in which fiction is becoming fact and the Holocaust is becoming a distant memory," Israel's U.N. Ambassador Gilad Erdan told the assembly in urging support for the resolution. "And as this happens following the greatest crime in human history, now comes the greatest cover-up in human history."

Erdan, the grandson of Holocaust survivors, said the resolution preserves the memory of the 6 million victims and is a commitment to make sure that Holocaust distortion and denial "will be tolerated no more."
He said social media platforms including...