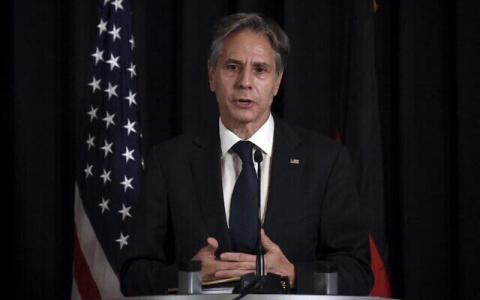 The United States and its allies have warned Moscow on Jan.20 of grave consequences if "any" of the tens of thousands of troops massed on the border were to cross the border into Ukraine.Following talks in Berlin with Germany, France and

Britain, US Secretary of State Antony Blinken underlined that Russia "cannot match" Western powers' resoluteness.
Allowing Russia to violate Ukraine's territorial integrity would "drag us all back to a much more dangerous and unstable time, when this continent, and this city, were divided in two... with the threat of all-out war hanging over everyone's heads," he said in the German capital.

In a show of that unity, German Foreign Minister Annalena Baerbock, speaking alongside Blinken, said the West would not shy away from taking action even if that included measures that "could have economic consequences for ourselves".
Fears are mounting that a major conflict could break out in Europe, and British Prime Minister Boris Johnson cautioned that Russia marching on Ukraine would have repercussions beyond the continent. "It would be a disaster for the world," he said.
In a bid to defuse the worst tensions between Russia and the West in decades, Blinken is on a whirlwind diplomatic tour that took him to Berlin on Thursday before his meeting with Russia's Sergei Lavrov in Geneva on Friday.

Moscow insists it has no plans to invade but has at the same time laid down a series of demands -- including a ban on Ukraine joining NATO -- in exchange for de-escalation.
Washington has rejected Moscow's demands as "non-starters" and NATO chief Jens Stoltenberg this week insisted that the alliance "will not compromise on core principles such as the right for each nation to choose its own path".
Upping...