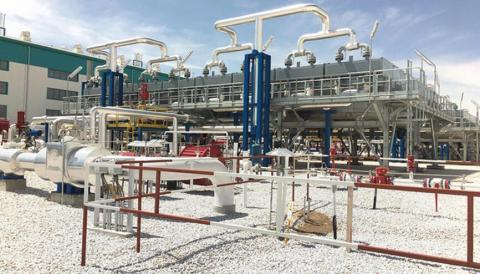 Turkey's Petroleum Pipeline Corporation (Botaş) has lowered natural gas flow to large industrial sites and power stations by 40 percent because of a disruption in pipeline gas imports from Iran.

The national pipeline company has taken all neceassary measures for households not be affected by the shortage, a statement released in the evening on Jan. 20 said.

The disruption could take up to 10 days, according to local media reports.

The Energy and Natural Resources Ministry has warned that businesses would suffer electricity outages as a result.
Iran cited technical failures and maintenance works for the disrupton on Jan. 20. Turkey relies on Iran for around 10 percent of its gas imports during winter months.

Natural gas inflow to Turkey's national network increased to 61.6 billion cubic meters (bcm) in 2021.
The figure was up 23.2 percent from 2020, when around 50 bcm of natural gas was distributed through the Turkish natural gas system. Turkey's natural gas storage capacity has reached 3.8 bcm.

In recent years, Turkey imported around 45 bcm of natural per year paying about $12 billion to pipeline suppliers Russia, Azerbaijan and Iran, as well as to liquefied natural gas (LNG) suppliers, including the United States, Morocco, Qatar and Nigeria. Nearly a third of Turkey's natural gas needs are met through LNG shipments.

Botaş's decision will cause a "production and planning stress on factories," particularly those in the export sectors, said the Istanbul Chamber of Industry (İSO) head Erdal Bahçıvan.

Natural gas prices jumped 25 percent for residential use and 50 percent for industrial use in January. The price rise was 15 percent for power generators.