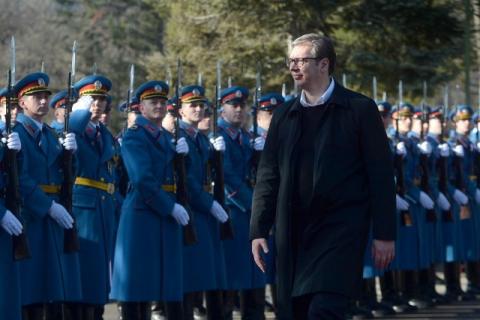 Being hosted on TV Prva, Prime Minister Brnabic said that she received notification of the planned assassination on Friday, January 14, under the label urgent.
"It is quite clear and unambiguous that the assassination of Vui is planned, even with the time when the murder was planned - in February this year," she said.
As she stated, all services are working to prevent the murder of Vui.
"We got it in writing through EUROPOL, anyone who has the courage or any moral courage to make fun of this..." she said.
„But it doesn't mean anything to me if we don't prevent it and catch those people earlier if we don't prevent them from entering Serbia or their hideouts in Serbia, then I don't believe in any personal security. Because if you want to kill someone you can kill them. So we have to prevent them that much earlier", Brnabic pointed out.
She said that people from the region, EU member states and other countries are in that criminal group, reminding that there is a warrant for Zvicer from Serbian authorities and that she suspects that he is the head of the Kavac clan.
„Our services are working to find those people and prevent the murder. In that information, Radoje Zvicer was marked as the organizer. I don't know whether he is at the head of that criminal group, and I doubt it and I think that there is someone who is above him but who they are and whether they exist at all, that will be determined by the investigation," Brnabic told TV Prva, stating that the notification was received in writing.
"Everything I say can jeopardize the investigation and warn those people," she said.
"For me, the primary thing is to prevent that and to protect the life of the President of Serbia," she concluded. Brnabic said that she did not...