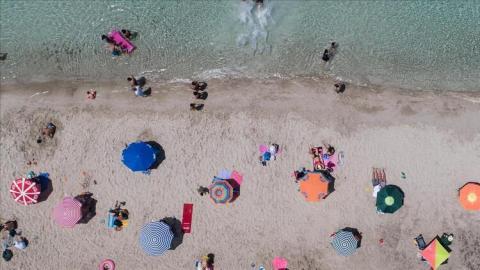 Domestic tourism spending in Turkey increased by 58 percent in the third quarter of 2021 from the same period of the previous year, while the number of local travelers rose nearly 9 percent.

The household domestic tourism data the Turkish Statistical Institute (TÜİK) released on Jan. 21 showed that spending by local holidaymakers stood at 29.8 billion Turkish Liras between July and September, which followed the 203 percent year-on-year rise to 10.7 billion liras in the second quarter of 2021.

Some 18.8 million people traveled domestically in the quarter while the number of trips made increased by 6.4 percent to 23.1 million.

The primary purpose of trips was visiting relatives, accounting for a 53.8 percent share, followed by travel, leisure, and holiday at 40 percent, and health-related travel at 2.8 percent.

The number of overnight stay, however, declined nearly 11 percent on an annual basis to 227 million and the average overnight stay was 9.8, down from 11.7 in the same quarter of 2020.

Eating and drinking constituted the largest chunk of the spending at 32. 4 percent while 23 percent went to transport costs. Accommodation was the third largest item at 15.3 percent.

In 2020, people made fewer trips due to the COVID-19-related restrictions, including travel bans, curfews and lockdowns.