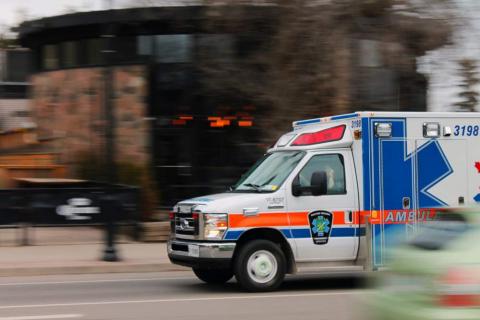 Ljubljana – Four persons, of whom one Slovenian and three Belgian citizens, were injured in a hot air balloon accident in the area of the Ljubljana Marshes on Saturday morning, the Ljubljana Police Department said. The injured persons were taken to the UKC Ljubljana hospital, which said that their lives were not endangered.

The accident happen around 10am in the area between Škofljica and Ig on the outskirts of Ljubljana when the hot air balloon carrying six persons was landing and the basket hit the meadow, the police department’s spokesperson Tomaž Tomaževic told the press.

The hot air balloon took off at the town of Bistra, some 10km south-west of Ljubljana, for an hour-long trip together with another balloon.

Both planned to land on the Ljubljana Marshes, and the second balloon, with three persons on board, landed safely, said Tomaževic.

Injured were a 55-year-old Belgian pilot, two women aged 28 and 54, and the only Slovenian on board, a 67-year old pilot assistant.

UKC Ljubljana said that three of them are heavily injured and were hospitalised, yet neither has life-threatening injuries.

Traumatologist Franc Štefanič told the press that one of the men had sustained the severest injuries, of the head and chest. The other two sustained injuries of the spine.

The cause of the accident is not yet known, and criminal police are continuing the investigation, said Tomaževic.

As Grega Trček from the Barje Balloon Centre told the STA earlier in the day, strong winds were blowing upon landing and four persons fell out of the balloon.

Several teams took part in the rescue effort, while fire fighters intervened to prevent a fire or explosion.

Tomaževic said that the Belgians had come to Slovenia today with all the necessary equipment to for a hot air balloon ride.

The worst hot air balloon accident in Slovenia happened in August 2012, also in the area of the Ljubljana Marshes, leaving six of the 32 people on board dead and several gravely injured, as the balloon caught fire upon landing in windy weather. The pilot was acquitted of all charges in 2018.