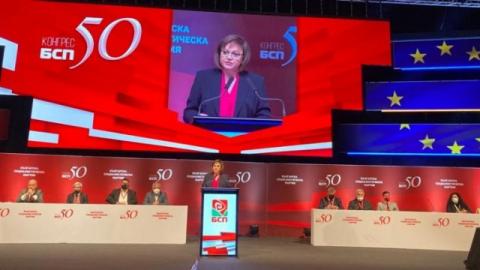 Kornelia Ninova remains the leader of the Bulgarian Socialist Party after the party's congress rejected her resignation in a closed discussion and a vote with 415 votes against, 164 in favor, and 20 abstentions.

Discussions and voting on Kornelia Ninova's resignation, closed to the media, were preceded by two-hour speeches by delegates. They were almost entirely in support of the leader of the Socialist Party, which said in November that it wanted to resign, and confirmed this in words on Saturday (January 22nd).

Some of Ninova's admirers mentioned her by name, others followed her example in mentioning BSP's participation in governing the country as a success for the party leadership. "Only with this leader can we continue what we started to show that strong people, strong leaders are being established in difficult times," said Veska Nencheva, who is also a current member of the BSP for Bulgaria parliamentary group.

"The party needs calmness. We must allow the leadership to work in a benevolent environment. I call on the delegates for common sense and support for the leadership and comrade Ninova," said Kamen Todorov, chairman of the BSP in Haskovo.

A total of only four party members spoke out against Kornelia Ninova. Krum Zarkov, who announced his readiness to run for new BSP leader, made the strongest impression. "Are you sleeping? Are you already intoxicated enough by what has been happening since this morning?" Anton Kutev (former spokesmen for the caretaker government appointed by Rumen Radev) and MEP Petar Vitanov spoke in support of Zarkov and the election of a new BSP leader.

Valeri Zhablyanov, who left the BSP parliamentary group for Bulgaria during the last GERB government, said that although...