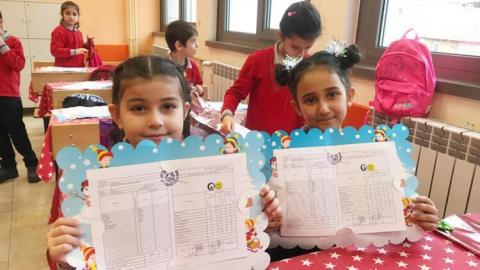 In-person education will continue after the two-week mid-term break which nearly 18 million students welcomed on Jan. 20 after receiving their report cards for the first semester in ceremonies full of cheer and excitement.

Speaking in a ceremony held at a school in Ankara, Education Ministry Mahmut Özer said that in-person education would continue following the break, putting an end to the rumors that holidays will be extended.

"Currently, there is no situation that would require the extension of the semester break. Therefore, I hope we will open our schools on Feb. 7 with the same determination to continue in-person education without any problems," the minister said while answering reporters.

He also asked teachers not to give students homework during this holiday period but recommended students should read at least one book.

"Students who do not have books should borrow one from libraries at schools and bring them back on Feb. 7 after reading it," he added.

In Istanbul, which hosts around 2.9 million school students, report cards were given a few hours early due to alerts declared by the Turkish State Meteorological Service of a cold wave dubbed as "Icelandic cold" to grip the country's northwest.

Students were sent home early to avoid traffic congestion and keep the main roads open since weather forecasts for this week predict harsh winter conditions, with chilling temperatures and constant snowfall for the Turkish metropolis with a population of over 16 million people.

Unlike in previous years, there was no massive human mobility at bus terminals, airports and train stations, but it was seen in the afternoon that there was a queue of vehicles on the bridges connecting...