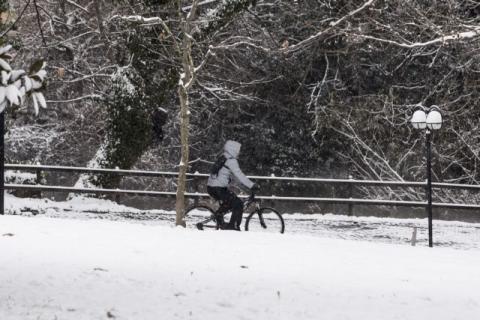 The severe weather front "Elpis" is in progress and in the next few hours it is expected to bring rain, bitter cold and heavy snowfall all over the country.

According to the latest forecast models, local and temporary snowfalls are expected even in the lowlands, with a significant drop in temperature and frost in most parts of the country.

Extreme weather conditions will affect the country on Monday and Tuesday, when snow is expected even in the plains of the country and in Attica, too.

Meteorologists warn that we will see snow even in the center of Athens, while temperatures, in several parts of Greece, can reach even -20 degrees Celsius.

The weather forecast for Saturday

There will also be northeasterly gales (Force 7) at seas. Frost at night and in the morning, in most parts of the country, while in the northern regions, there will be total frost conditions.

More specifically, on Saturday, January 22, 2022, snowfalls are expected even in the plains of Macedonia, Thrace, Thessaly, Eastern Sterea and on the islands of the North Aegean, but also in areas with low altitude of the northern Peloponnese above ~ 200 meters.

Rains and snowfall in the mountains are expected all over Greece, while in the Cyclades, Crete and the Dodecanese there is a possibility for thunderstorms and small hail.

The temperature will range, in...

Divisive Statue of ‘Assassin’ May Return to North Macedonia

President Radev: It is High Time to Stop the Anti-Bulgarian Ideology in North Macedonia

Influx of Anti-Bulgarian Rhetoric by the Macedonian Elite