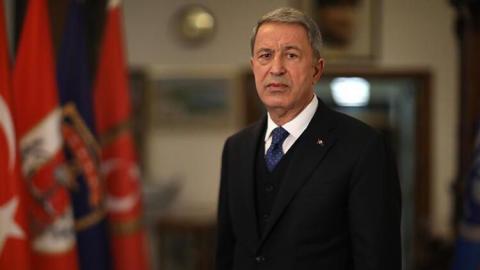 The biggest problem between Turkey and the United States is the latter's support to the YPG in northern Syria, Turkey's defense minister has said, expressing his hope that the matter between the two allies can be resolved through dialogue.

"The biggest problem with the U.S. is the YPG. But the problems between Turkey and the U.S. can be resolved through dialogue," Defense Minister Hulusi Akar was quoted as saying by daily Milliyet over the weekend.

The YPG is no different than the PKK, a designated terror organization by the U.S., the European Union and Turkey, Akar said, underlining that this fact is also well-known by Washington.

"They have to do whatever is necessary for the good sake of friendship and alliance. We expect our allies to understand this as soon as possible and to cut aid and support, especially arms and ammunition," he stated.

Turkey and the U.S. have long been at odds because Washington's continued partnership with the YPG in the fight against ISIL in northern Syria. The U.S. says it partners with the SDF, whose main component is the YPG, and stresses it is only an anti-terror tactical move.

With fears of the YPG creating a terror corridor on its southern borders, Turkey executed four cross-border operations into northern Syria over the recent years and announced that it will continue to protect its borders and citizens against the terrorists.

"Our stance on the PKK/YPG is clear. Wherever the terrorist, that's our target. And this will continue until the last terrorist is neutralized," the defense minister said, vowing everyone -even the supporters of these terror organizations, will see that in the future.

Talks on F-35s will happen soon

Other issues on the table with the...