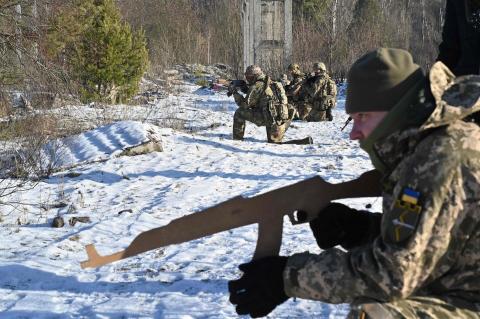 The British government on Saturday accused Russia of seeking to replace Ukraine's government with a pro-Moscow administration, and said former Ukrainian lawmaker Yevheniy Murayev is being considered as a potential candidate.

Murayev is head of the small pro-Russian party Nashi, which currently has no seats in Ukraine's parliament.

Britain's Foreign Office named several other Ukrainian politicians it said had links with Russian intelligence services.
It's unclear what means Britain believes Russia might use to install a friendly government in Kyiv.

The U.K. government made the claim based on an intelligence assessment, without providing evidence to back it up. It comes amid a war of words between Moscow and the West over Russia's designs on Ukraine.

Foreign Secretary Liz Truss said the information "shines a light on the extent of Russian activity designed to subvert Ukraine, and is an insight into Kremlin thinking."

Truss urged Russia to "de-escalate, end its campaigns of aggression and disinformation, and pursue a path of diplomacy," and reiterated Britain's view that "any Russian military incursion into Ukraine would be a massive strategic mistake with severe costs."

Britain has sent anti-tank weapons to Ukraine as part of efforts to bolster its defenses against a potential Russian attack.

Amid diplomatic efforts to defuse the crisis, U.K. Defense Secretary Ben Wallace is expected to meet Russian Defense Minister Sergei Shoigu for talks in Moscow. No timing has been given for the meeting, which would be the first U.K.-Russia bilateral defense talks since 2013.

The U.S. has mounted an aggressive campaign in recent months to unify its European allies against a new Russian invasion of Ukraine. The White...