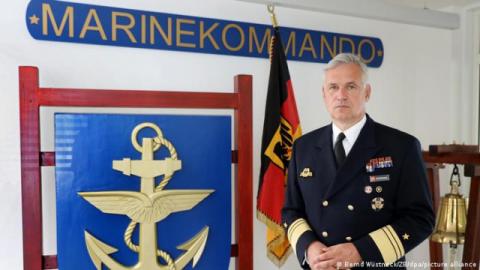 Germany's Navy chief, vice-admiral Kay-Achim Schoenbach, has resigned just a day after he said that Crimea "will never come back", and that Putin and Russia "deserve respect." pic.twitter.com/cmHHZ8M3e4

"I asked the Minister of Defense, Christine Lambrecht, to dismiss me immediately," the admiral said in a statement. "The minister accepted the request."

The vice admiral had also called the idea that Russia wanted to invade Ukraine "nonsense."

What Putin wants is "to be respected," the admiral said in a video released on the Internet, which was filmed at a meeting of an analysis group in Delhi on Friday. "It's easy to give him the respect he wants and probably deserves," Schönbach added. He described as nonsense the idea that Russia wanted to invade Ukraine.

In the afternoon, the Vice Admiral apologized, calling his remarks ill-considered. "It was obviously a mistake," he added on Twitter. But in a statement later that evening, he explained that he had resigned "so as not to cause further damage to the German navy and especially to the Federal Republic of Germany."