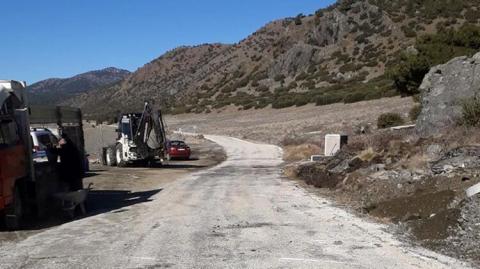 Excavation works with ladles to build a water tank on the beach of a famous lake, which has been dubbed "Turkey's Maldives" for its white sand and clear water, have sparked fury, prompting action from local authorities.

Located in the southwestern province of Burdur and having been declared a "special environmental protection area" by the government, Lake Salda has been headlined with a new construction move that poses a danger to its unique nature.

Gazi Osman Şakar, head of the Lake Salda Conservation Association, said that a well was dug with ladles and a channel was opened on the edge of the lake although it was stated that no nails would be hammered in the surrounding area of the lake.

He stated that the water obtained from this well is transported to an area where hydromagnesite sediments are located in the southeastern part of the lake through a pipeline to be used for drinking and usage purposes at a facility opened to tourism activities as a result of renovations and beach arrangements.

Stating that a water tank was also built in the region, Şakar said: "Now, since the plastic tank has been punctured, excavations are carried out and a concrete water tank is built in its place. The excavated site is 50-100 meters from the lake and enters the first-degree natural protected area."

"We believe that opening the facilty to tourism activities is wrong," he added.

Noting that many endemic species live in and around Lake Salda and also cyanobacteria that have survived since its formation, Şakar stated that it is inconvenient for people to swim in the water since the pollution cannot be discharged because the lake is in a closed basin.

"The more beaches around the lake, the more damage will be done to the lake and its...